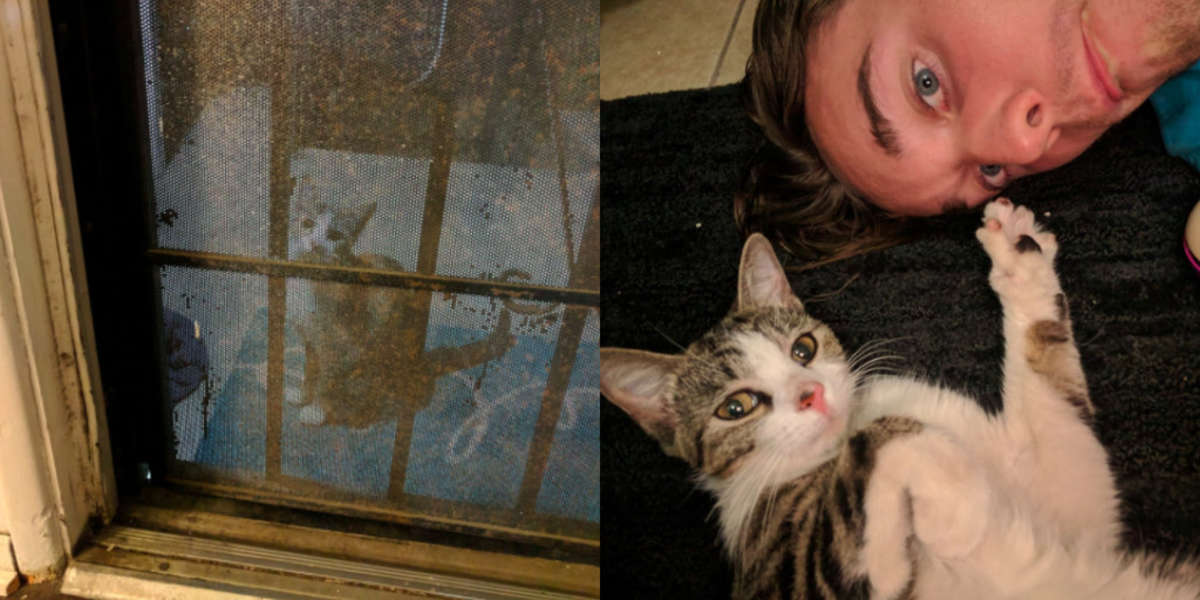 Connor Manning was driving home late one night, depressed after a breakup, when a little cat emerged. Manning could tell the cat had been on the streets for a long time since she was extremely emaciated, filthy, and flea-infested.

Manning knelt to say hello, and the adorable stray cat unexpectedly climbed into Manning’s lap and refused to go.

“After about five minutes, I started getting up to head home and she was SUPER scared,” Manning told.

“So I crouched down and she ran right over to me again. And we repeated this process for about four blocks until we were on my porch.”

The cat followed Manning all the way home, and came inside to explore the house for a bit.

Before deciding that she was too scared to stay inside and taking up home on Manning’s porch instead. Manning tweeted about his first few hours with the kitten, to the joy of everyone who viewed the adorable messages.

Manning had plans to go over to a friend’s house for a bit, and put out a bed and some water for the cat — later named Socks — on the front porch, secretly hoping she might stay.

When Manning got home, Socks wasn’t there anymore …

Manning noticed a fairly mild noise coming from outside after roughly an hour.

Manning said, “I heard the smallest meows from my door and she came back and I about died it was so sweet.”

While Socks had been cautious at first, it appeared that she had picked Manning as her human, and once she was back inside the home, she refused to leave — just as she had refused to leave Manning’s lap when they first met.

Socks seem overjoyed to have finally found a secure place to reside after spending six months on the streets. Socks appeared to be more than willing to live with Manning for the rest of her life, but Manning still had to cope with one minor obstacle.

“I’m, like, super allergic to cats,” Manning said. “My family had to get rid of one when I was little because of it. Driving home from our first vet trip, my throat started to close up, so at that point for my own safety I decided I’d give her to someone else.”

Manning began to search for someone else to adopt Socks …

Socks, on the other hand, was not having it. Manning knew that, despite the allergies, it would be hard to part with the highly affectionate cat once she had picked her home and was determined to stay.

Manning stated, “I was in love.” “I felt good after a few days of having allergy meds in my system!” So, she’d arrived at her destination!”

Socks was legally adopted by Manning, who resolved to do whatever it takes to keep her around.

Socks has been following Manning home for a little over two months now, and the two couldn’t be happier with their new life together. Socks is now terrified anytime the door to her new house opens, maybe because she is fearful of returning to her previous existence on the streets — but fortunately for her, that will never happen.

“She’s a little sweetie, loves meeting new people and [is] full of energy,” Manning said. “Watching her go from a bone-thin lethargic baby covered in fleas into this little pounce machine has been so rewarding.”

TRENDING
SEARCH
Recent Posts
We use cookies on our website to give you the most relevant experience by remembering your preferences and repeat visits. By clicking “Accept All”, you consent to the use of ALL the cookies. However, you may visit "Cookie Settings" to provide a controlled consent.
Cookie SettingsAccept All
Manage consent

This website uses cookies to improve your experience while you navigate through the website. Out of these, the cookies that are categorized as necessary are stored on your browser as they are essential for the working of basic functionalities of the website. We also use third-party cookies that help us analyze and understand how you use this website. These cookies will be stored in your browser only with your consent. You also have the option to opt-out of these cookies. But opting out of some of these cookies may affect your browsing experience.
Necessary Always Enabled
Necessary cookies are absolutely essential for the website to function properly. These cookies ensure basic functionalities and security features of the website, anonymously.
Functional
Functional cookies help to perform certain functionalities like sharing the content of the website on social media platforms, collect feedbacks, and other third-party features.
Performance
Performance cookies are used to understand and analyze the key performance indexes of the website which helps in delivering a better user experience for the visitors.
Analytics
Analytical cookies are used to understand how visitors interact with the website. These cookies help provide information on metrics the number of visitors, bounce rate, traffic source, etc.
Advertisement
Advertisement cookies are used to provide visitors with relevant ads and marketing campaigns. These cookies track visitors across websites and collect information to provide customized ads.
Others
Other uncategorized cookies are those that are being analyzed and have not been classified into a category as yet.
SAVE & ACCEPT